A lack of confidence can really destroy one's career. I'm still not ready to show my new work. I don't know what is holding me back, but I have to figure it out. I'm hanging the last few paintings in my possession from my older work that haven't sold (or been stolen -_-). There is a showing tonight and tomorrow at Contrast. Just scroll for details, it's the only venue I've been showing at this past year while I've been in this uncomfortable cocoon state. I doubt how many people read this anymore since my inactivity. But if you want to go, there is no fee for entry.
I did another cover for Victory Records, for The Bunny and The Bear. One of those jobs where they just told me what to draw and I drew it. My style lent itself well to the look they were going for. It's not my most favorite piece, but it's cool, the fans seemed to like it and that's all that matters. I don't even want to get into the computer trouble I've been having. I had to work on a new machine for this, my imac was destroyed in the move. It's just been setback after setback. I'm having trouble getting myself to respond positively to anything I make recently (recently?). I didn't get the okay to post it but the first panel of four is on their facebook page and they animated it for a promo if you'd like to take a peek. I didn't do the type, carebear t-shirt or green bear t-shirt. If you're into the music you can preorder on the website.


So, I'm not even ready to share studies yet. I don't want to rush this. The message in my new chapter is very important to me, it just has to be executed as perfectly as I am able. I want the message to be complete, rather than showing one part of it. I feel like it's never going to get out there at this rate. I can't defeat myself more than I already am. I need to focus and pull through. Heading downtown to hang, I shouldn't feel like such a failure, but I do.


Edit... Oh and here is pictures from a commission I did over the Holidays. I still have to do a post of back work. The client seemed very happy, again, that's what matters. There are some close details of my work finally, but I'm still told it looks much better in person. I don't know how to translate my texture and subtitles with the photography, it just won't pick it up. Maybe taking pictures in sunlight? I've been told to do that but I'm a vampire... so... no, I'm kidding, obviously, I'll try that next time. 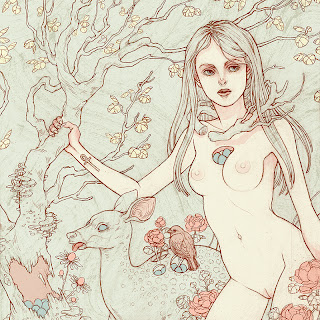 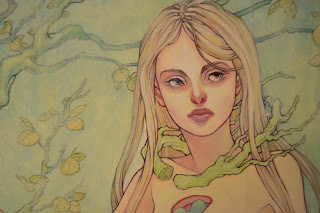 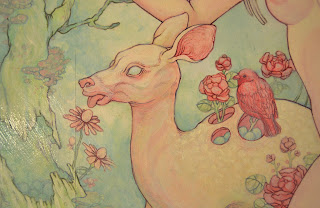 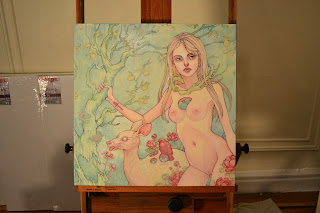 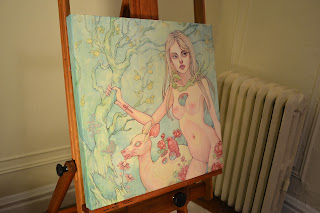 Now I've got to run. 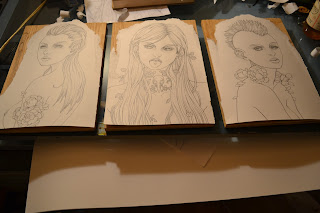 Edit again, trying to find back work, it's all over the place. These were pieces from the last show (which was punk themed) I made just to sell and practice some painting techniques (just the drawings here). I was working down to the minute with the move and everything going on, I didn't get a picture before they sold. I still have the center one, I took a picture but can't find it at the moment. My computer files are a serious mess after they had to pulled from my old drive. I think I snapped one with my phone after I hung but that phone got destroyed too. I'll have to contact the person who bought them or try to pull the files from my broken phone later. Now I'm going to be late. Really have to run now.
Posted by Chelsea Greene Lewyta at 1:50 PM


There is a Contrast show going on tonight and tomorrow that I have work in (some new). The Barb Wire Dolls will be playing tomorrow night. If you're a fan of punk, you should try to make this show: November 30 and December 1st, 6pm-1am. 320W 37th Street, 14th Floor. New York, NY
I won't be there because I will be packing and moving. I finally found a new studio that has adequate living and work space on a freelance budget. Luck to anyone trying to do that alone in this city, it was very hard to find (and don't go to the south Bronx).
My new series is still in the early phases. I have to get caught up on some back work (always). My life has been consumed with my effort to improve it, but I am very excited to get back into the groove. I will also need to attend to my online presence and update everything. I'm considering starting a new blog for the new body. I wish I could purge the internet of my old work. I wouldn't delete this blog before redirecting, so you will be informed.
I will be getting settled and busy with the holidays. When I unpack my camera I'll upload some stuff from 2012. I hope to share my new series with you in the beginning of the new year and start participating in shows again.
Looking forward to 2013.
Stay safe, and have a great Holiday season.
Posted by Chelsea Greene Lewyta at 9:55 PM

I am alive. Recovering and creating.

I'm still dealing with a lot of health issues.
I haven't updated my shows or any work. I did manage to sell the majority of my oil paintings this summer from a few NYC shows.
Right now I'm in the process of getting a new studio space and working on a new body of work. I'm not ready to show any of the progress. I'm thinking of presenting it as whole, in it's entirety as a series.
I haven't gone through my e-mails in months. I'm sorry if I haven't gotten back to you.

I've deleted my personal facebook account, and with it went my fan page. Currently, anything found under the name Chelsea Greene Lewyta (or some combination of the name) on facebook is not published by me.
I'm listed on google+, but I don't use it. If I haven't responded to requests, please don't be offended. I'm stepping away from social networking right now.
I've also been receiving a lot of e-mails asking me about my experiences as an artist or illustrator which I haven't responded to at all. I apologize, but I can't seem to formulate a response.
So here is a general one...
I've been dealing with health issues prior to graduation and I've been struggling with nearly everything. I do not think I am a good candidate to answer questions about the field. I'm not doing and I haven't done much illustration work. Most the work floating around out there as my "illustrations" are works that I did for classes at Pratt. Post graduation, I've really just been creating work for work's sake, and whatever project came along that I thought I could do, I would do. I got invited to show my work internationally prior to graduating and I just kind of ran with it without really knowing about that side of the art business. I'm learning as I go, truth be told, I should probably be sending out some advice asking e-mails myself. I was more interested in doing personal or themed work for shows, than illustrating. A lot of my work is also unpublished, commissions by individuals, not associated with a company. I don't really know what you would define me as, besides the vague term of "artist", I'm still finding my niche. I only began painting traditionally in the Summer of 2009, with just a few traditional art clases under my belt. I have A LOT to learn. What I'm working on isn't really what I studied for, at least the business and practical side of it.
Conclusion: I'm still finding myself as an artist.

I have a bunch of projects I'm working on, but my health is really what I'm focusing on right now. I've been neglecting it for far too long. I'll keep this blog updated with work and show information. Two of my upcoming group shows are themed, one is skate decks- profits go to skateparks, and one is small works on paper.
I'm not taking any new projects on at the moment. I have a handful of commissions to catch up on, a donation piece, work for above listed shows, and lots of clinic appointments.

Interpretation of Beauty and the Beast. This is for Wayward Fairy Tales. I'll be prepping canvases this weekend. I have to finish painting these my the end of February.
(Edit: 2/11: Cleaned up the beast and added some details. 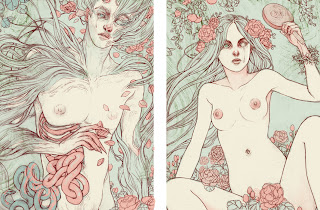 Mirrored...
Posted by Chelsea Greene Lewyta at 1:14 AM

Ready or Not. The Marketplace Gallery. Albany, NY. November 2010. 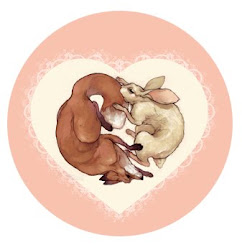